THE HEART OF THE DAKAR

When the going gets tough, the tough get going. FPT Industrial is again taking part in the annual, world-famous Dakar rally, and is a 2019 sponsor, equipping the four trucks of the Petronas Team De Rooy IVECO with its Cursor 13 engines.


The Dakar rally is one of the most extreme competitions in the world, but it is not for the fainthearted: it requires passion, technology and endurance, and theFPT Industrial Cursor 13 has all of these features. While the FPT Industrial engine was conceived to deliver high performance and top efficiency, all while respecting the environment, in industrial applications, it has also proven itself in racing. The IVECO vehicles’ Cursor 13 engines were especially engineered for such a challenging rally. The customization was undertaken at the FPT Industrial Arbon Research & Development center.

The 13-liter engine is renowned for its reliability in on-road long haul missions, as well as in agricultural applications, such as for large tractors and harvesters. The IVECO vehicles’ Cursor 13 engines were especially engineered for such a challenging rally and can reach a maximum power of up to 1,000 hp.

The engines have proven their reliability, robustness and top performance by conquering the most challenging stages and terrain in past Dakar rallies. FPT Industrial specialized technical staff will support the team for the entire duration of the rally.


The 2019 Dakar rally marks the 41st running of this annual event, and this year will cross Peru for an epic adventure: 5,000 km, 10 stages (from January 6 to January 17), across dunes, sand and rocky terrain. It will start in Lima, the Peruvian capital city, and then move to Pisco, on the Pacific Ocean. Then the tour will bring the trucks to Arequipa, also known as the White City, at almost 2,300 meters above sea level and this terrain will be the toughest for the trucks.


The most extreme stages need a powerful engine and the Cursor 13 responds optimally to high altitude, maintaining the same turbo speed and providing full control of this feature. The rally will finally end in Lima on January 17. 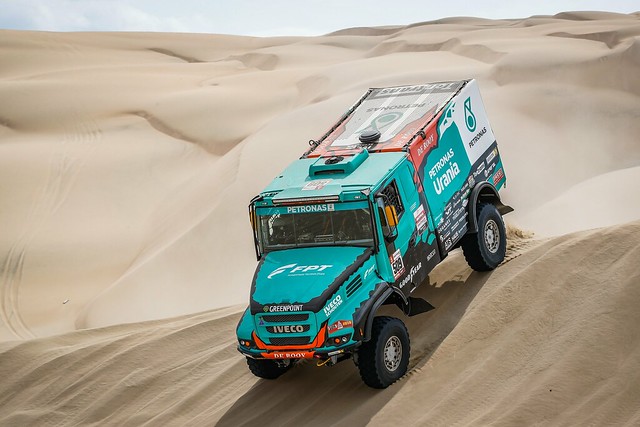